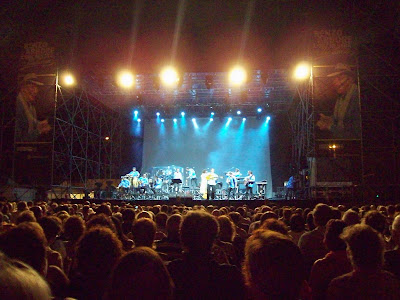 The annual patron's saint festival in Giovinazzo (6k south of Molfetta) was crowned with a concert by Renzo Arbore and his Italian Orchestra. Arbore is a great musician and ironical humourist whose group travel Italy and the world performing the best-loved songs from the Neapolitan repetoire. They also mix in jazz, swing, scat, reggae, you name it.

This concert was special because it was also a fundraiser for Luca Mongelli, a 13 year old boy from Giovinazzo. When he was 7 his family lived in Switzerland. One day, while he was playing outside, he was attacked and left for dead in the snow. Luckily, his mother found him, but Luca was in a coma for 3 months and the doctors had all but given up hope on him when he woke up. He is now blind and confined to a wheelchair, but has made great progress thanks to special treatment available only in the US. Renzo Arbore donated €50,000 of the proceeds from last night's concert to Luca's family.

Information on how to help Luca can be found at this link. It's all in Italian, but I'd be happy to help anyone needing a translation.

p.s. here's some music by Renzo Arbore and the Italian Orchestra...
Posted by Saretta at 10:44 AM

What a mob at the concert - looks like fun. I hope that your Luca got lots of EEE in addition to that contributed by Renzo Arbore - what a generous thing for him to do.

Yes, he is also the spokesperson for the "Lega del Filo d'Oro" which is a nationwide nonprofit organization organized to help people who with serious physical disabilities. At the concert they passed the hat around any many spectators contributed as well.