Heracles, the Colossus of Barletta 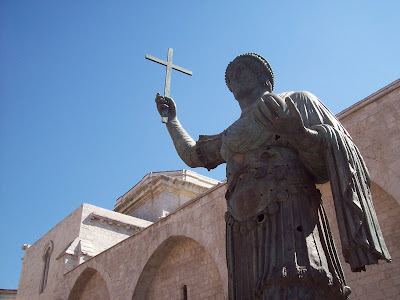 This 4.5m bronze statue is located in the town of Barletta (about 30k north of Molfetta) outside the Basilico del Santo Sepolcro. Both its subject and origins are surrounded by mystery...but there are lots of fun legends surrounding it, such as the one that says it represents Heracles, or Teodosio II, an Eastern emporer, who for some reason was in Barletta. Since he was taller than the roofs of the buildings and the city walls he noticed that an enemy army was headed toward the town. The Barlettans sent him out of town to await the enemy on the road. The enemy soldiers found him crying noisily and asked him why he was so upset. He replied that he had been kicked out of town because he was the smallest and weakest person around, even the children refused to play with him! The Saracens imagined that the townspeople must all be even bigger than this giant and decided to turn and run. Heracles, of course, became a town hero and is still guarding over the city in the form of a statue.
Posted by Saretta at 10:44 AM

I love that story! Nothing like a "tale" to keep history interesting.

Nicely told! And good to hear that these little legends get passed along even today.

Is this the statue that was pulled out of the water not so long ago?

Artic Dreamer & Uselaine - I agree with you wholeheartedly. History is fascinating when there are stories that bring it to life!

Fern - According to Wikipedia...A legend says the statue washed up on a shore after a Venetian ship sank returning from the sack of Constantinople in the Fourth Crusade (1240 AD), but it is known that a colossal statue was discovered in 1231-1232 during excavations commissioned by emperor Frederick II in Ravenna, and is probable that he had it transported to his southern Italian lands. The first certain news about the statue date however from 1309, when its legs and arms were used by local Dominicans to cast bells. The missing parts were remade in the 15th century.

`Heracles` is the Greek rendering of the classic hero Hercules.

Heraclius is famous for defeating the Persians after the former had conqured Jerusalem and stolen the True Cross. His war against Persia lasted for 20 years and ended with the Battle of Nineveh.

He is also noted for making Greek the official language in both the Army and State, allegedly because `the soldiers can no longer understand the language of the Caesars`.

Archaeologists believe that the statue represents Emperor Theodosius II, but I like to believe that, in accordance with the Italian legend, it represents Heraclius.