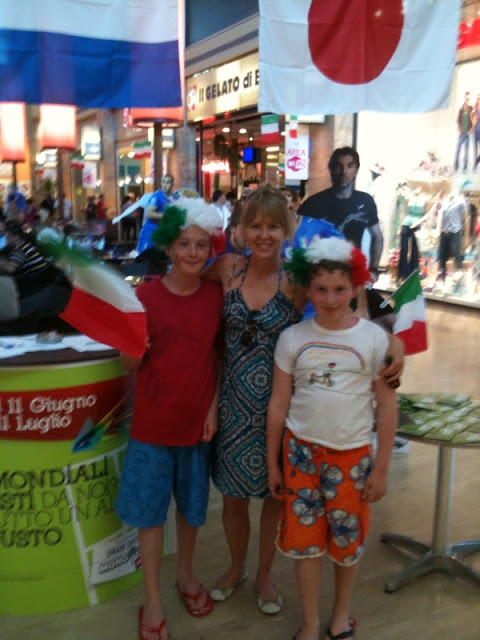 This photo (taken on my husband's cellphone) is of poor quality, but I couldn't resist showing you some of the wacky World Cup fever that has grabbed all of Italy by the...shoulders and is taking the nation by storm. You can't go anywhere without hearing, seeing or being immersed in World Cup-ness! My older son, who is a big soccer fan and remembers the last "Mondiali" quite well, is amazed at how much more commercial and omnipresent the whole event has become this year. He is tickled by all the dancing of the South African fans but rather annoyed by those horns they blow on constantly!
Posted by Saretta at 4:36 PM 13 comments: 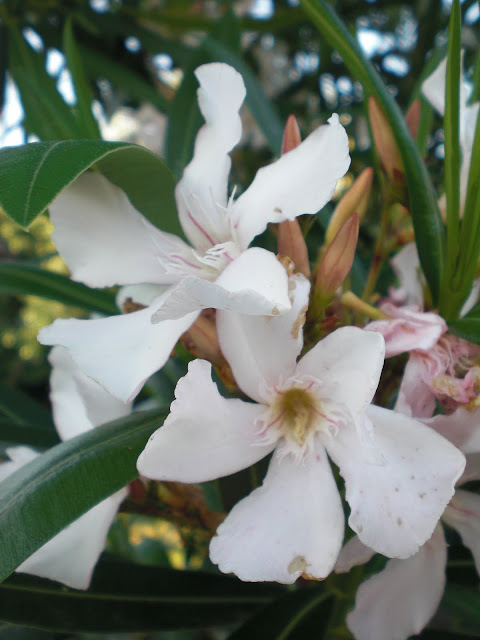 The Oleander is another flowering tree in my front yard. I love its delicate pink petals and had no idea until looking it up online that it is one of the most poisonous plants in the world and contains numerous toxic compounds, many of which are deadly to people, especially young children. (Despite this fact, it is often grown in school yards.) The toxicity of Oleander is considered extremely high, and it has been reported that in some cases only a small amount had lethal or near-lethal effects. Who knew?
Posted by Saretta at 4:43 PM 6 comments: 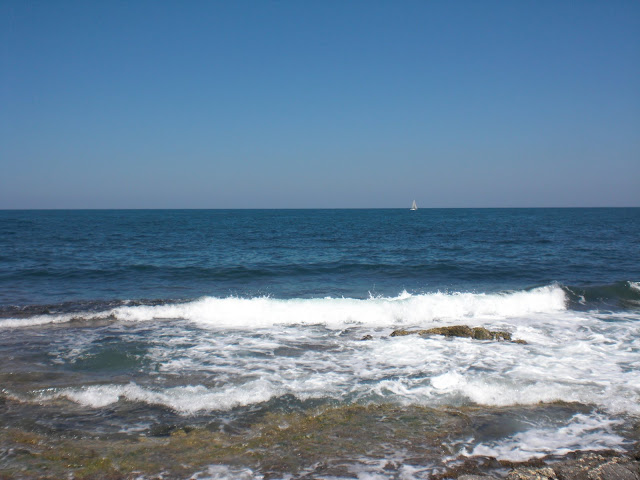 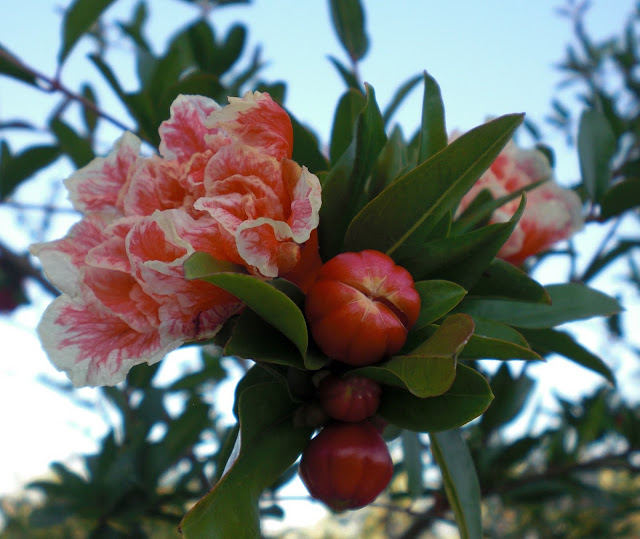 These are the buds and flowers on the ornamental pomegranate tree growing in my front yard. I love the delicate and variegated color of the petals. These trees do not make edible fruit, but are pretty and create some shade. They are carefree and drought resistant, and don't mind the southern Italian heat. Which, by the way, has arrived with a vengeance!
Posted by Saretta at 11:56 AM 10 comments: 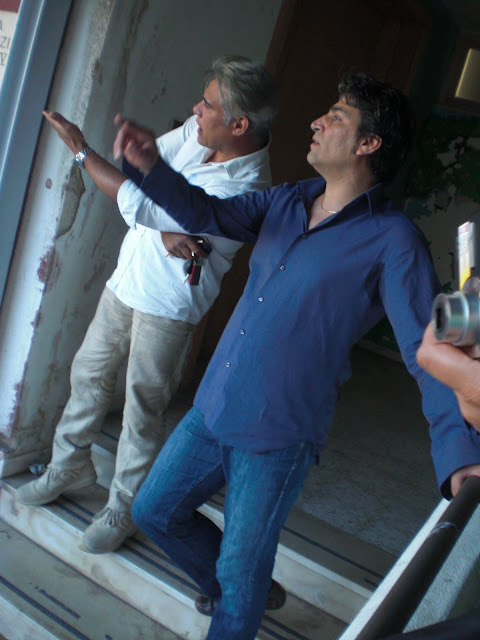 This is not a particularly great photo (I just happened to take it accidentally while playing with my camera), but I wanted to share it because it somehow captures a bit of the Italian spirit.
These two men are fathers at the end-of-school celebration at my younger son's elementary school. The fifth-graders have completed their first school cycle in the Italian system after having spent 5 years with the same classmates and the same teachers. Next year they will go to junior high and have to start all over, with a new school, new classmates and new professors.
But, back to the "Italian-ness" of the guys in the photo...they are both quite attractive, casually well-dressed and making grand gestures. Why the gestures? Because the children were marching toward them, waving little colored handkerchiefs. 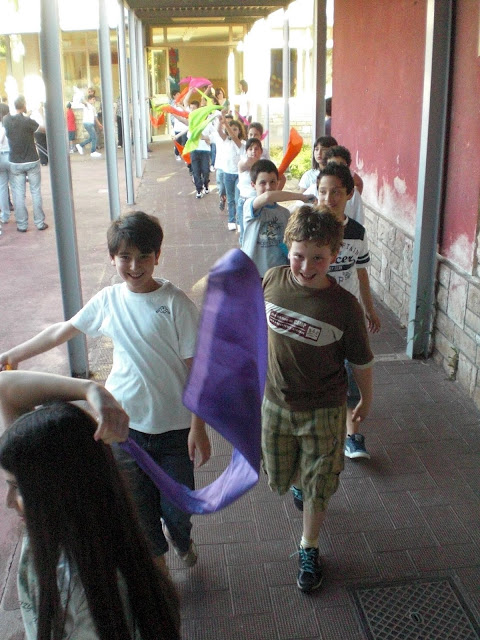 Italians are famous for their gesturing, most cannot talk without moving their hands because Italian gestures have specific meanings and add content to a discussion. They are not just flailing their hands about willy-nilly, no they are saying something with each gesture. That's why they even gesture when talking on the telephone!
Posted by Saretta at 11:30 AM 6 comments: 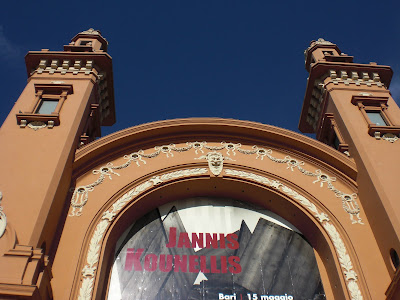 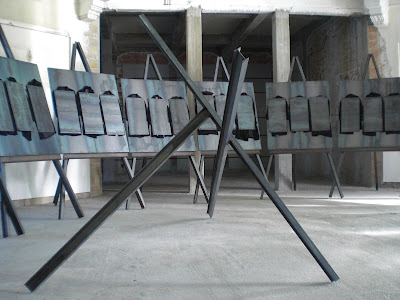 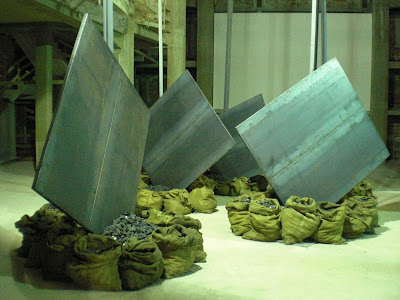 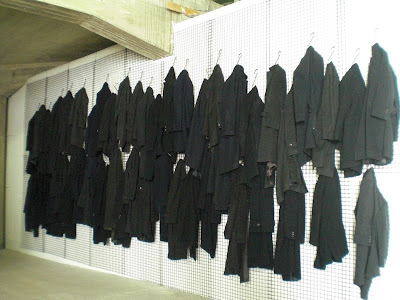 For more information on Kounellis, you can read this review in English of another exhibit of his.
The exhibit in Bari is running until September 20.
Posted by Saretta at 8:29 AM 4 comments: 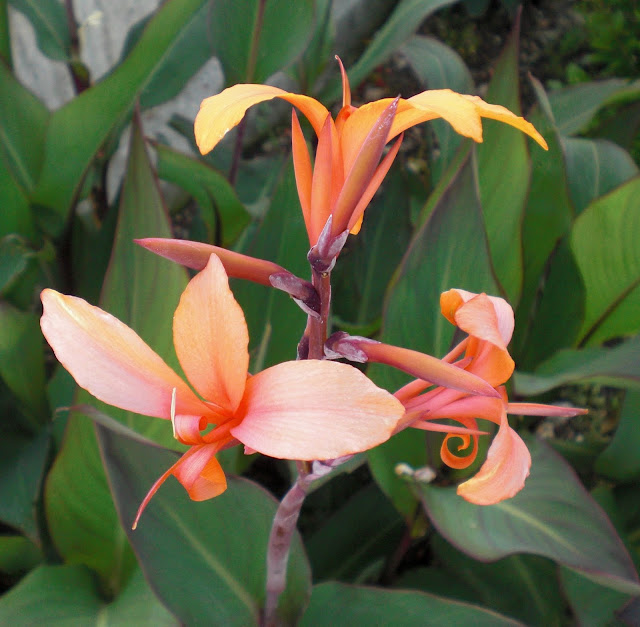 Who can help me identify this pretty orange flower growing in my garden? I thought it might be a tiger lily, but it's not. It doesn't have those noticeable stamen in the center like a lily. Plus, a characteristic of each bloom is that one petal curls downward in a lovely curlique. Any horticulturist readers in the know?

I am honored that Molfetta Daily Photo has been selected as a Travelavenue Favorite Blog 2010. Travelavenue browses the web to find blogs which offer "content quality, originality but also tips and local advice." They believe this helps their readers "to discover destinations through a completely different perspective." Why not check out their site when you're planning your next trip anywhere in the world?
Posted by Saretta at 5:06 PM 10 comments:

Vespa Star at the Beach 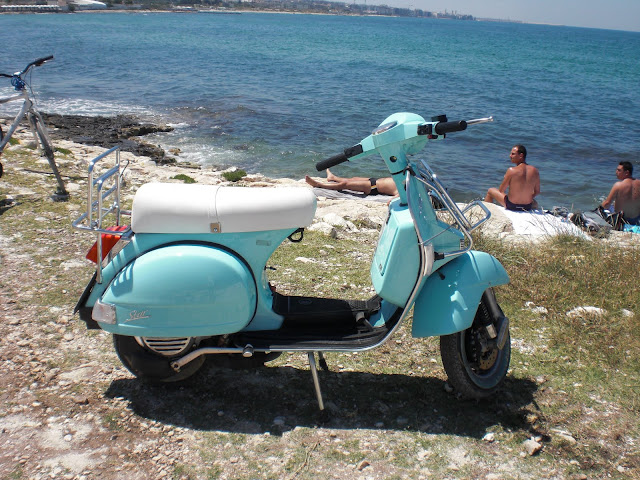 With the lovely warm days during the past week, it's safe to say that beach season has officially arrived in Molfetta. What says "summer" better than this cheerful light blue Vespa Star parked at the Torre Gavettone beach?
Posted by Saretta at 2:21 PM 17 comments: 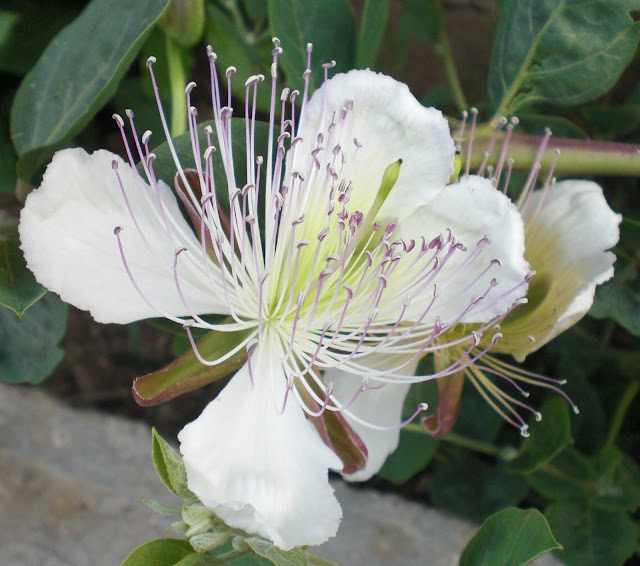 The beauty of caper flowers is as fragile and short-lived as that of poppy flowers: The delicate, cream-white petals and lively purple stamina persist only a few hours. When cultivated for the capers, the flower never blooms as the bud must be harvested before it blooms.

Capers are essential for several Mediterranean cuisines and are mostly associated with Italian (and Cypriot) foods. They are mostly used in tomato or wine sauces and suit poultry and fish. Furthermore, they are popular with cold meat and frequently used on pizza. Capers harmonize with most other Mediterranean spices (basil, oregano and garlic, just to name a few) and are frequently combined with pickled olives.

They are also hardy little plants. The plant in this photo grew out of the wall on my front patio...without any dirt...and it broke the terracotta baseboard. The "spinosa" in its Latin name refers to its sharp thorns. An example of the "strength" of beauty!