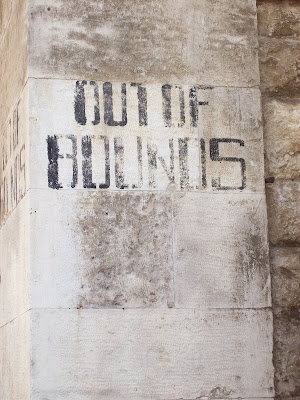 You can find OUT OF BOUNDS on the wall along Via Tenente Ragno. It was painted there during World War II by the Americans to indicate the safe area of town. Italy was liberated by the Allies town by town, street by street. Beyond this point in town you were fair game for the Germans.

My mother-in-law used to tell amazing stories of the occupation, first by the Germans, then by the Americans. Both were polite and reasonably well-behaved in her experience, despite the fact that they had requisitioned a large part of the building she lived in. She even had an admirer, John from Texas, who serenaded her with his guitar from below her window. She wasn't interested, but that guitar has become a family heirloom. John, who died soon after at the front, carved "Remember me" on the guitar...and we have. 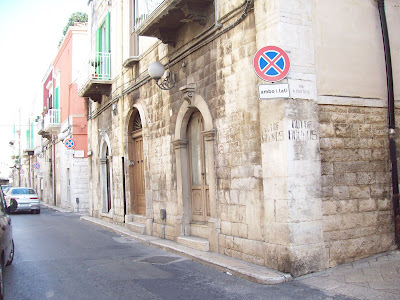 This is what Via Tenente Ragno looks like now. You can hardly see the writing on the wall...and most people pass by without noticing it or thinking about what it means.
Posted by Saretta at 9:26 AM

I've just been reading your posts in the CDPB forum about cameras and photoshop and just had to see what you are doing following what Babooshka and Jilly said. I must say I'm impressed! You've got some great images here :)

This is such an interesting photo and story. Thanks for sharing both of them with us. And thanks for stopping by for a margarita in Portland, Oregon.

Wow, neat post. I would have thought the meaning of that was totally different. I love these types of pictures and stories.

Marley - thanks, I'm glad you like my photos! I hope to have time soon to "study" photography a bit!

Lynette & Jim - happy to share the photos and story. I think this kind of story brings the history of a town alive!

You brought tears to my eyes with your story about John. Gosh, what a difficult time. I'm so glad your family have honored his memory -- and what a sweet memory it is, of him singing to your mother. Do you have his last name? If his family is still alive they may be interested in hearing the story too. If you have it, e-mail it to me and I'll try to locate them for you, if you want. :)

What an evocative story. It's fascinating to talk to the old people here about the war - they all have tons of stories. (our ancient neighbor walked home from Russia!) It's so hard to realize that only 65 years ago this country was torn to pieces - something most of us cannot imagine. I love that the Out of Bounds is still there, and that you've recorded it here... thanks.

That is a wonderful, wonderful story of hard, confused times. Even amid all that political and battlefield chaos, a simple human interaction rings through most strongly. The images are astonishing for their record of what persists on the street so long after the event.