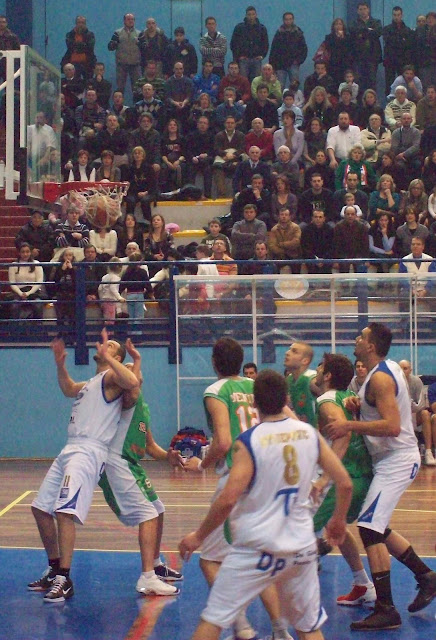 My family are active followers of the local semi-pro basketball team, Virtus Molfetta. This is the first year that the team has moved up into the "semi-pro" category and they are not doing so well. They are in third to last place in the rankings.

Tonight's game was one of those neck-in-neck sort of games with a close score from beginning to end with the teams alternating being ahead by two or three points. In the last two seconds of play, Molfetta scored a three-pointer that would have put us ahead by one point...but it was invalidated by that lousy bum of a referee! The game was a real heart-stopper.

I don't have the right kind of camera for sports action photography, but I liked this shot of the Mofetta Virtus team making a basket.

I don't know when you've been in the States last; but, soccer has become a major cable product. We get dozen of stations that carry every soccer match you ever wanted to see. For the last forty years AYSO-American youth soccer organization, has trained little boys and girls and their parents. "Soccer Moms" are now part of the lingo.

It's a great shot and I'm sure they will do just fine with you and family cheering them on.

Lakeviewer - soccer is the number one sport here in Italy, but neither of my sons plays it. The older one is a basketball fiend and the younger one's favorite sport is scuba diving. So, I'll never be a soccer mom! :-)

Pam - thanks for your support, we need all we can get this year!