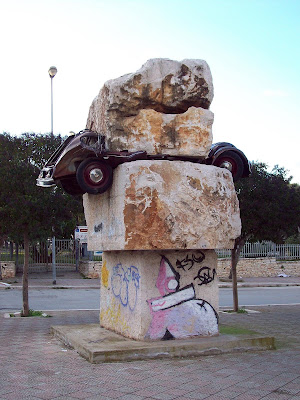 This sculpture by southern Italian artist Antonio Paradiso met with much criticism when it was first installed on the port. It is made of three enormous blocks of granite and a Citroen 2CV squished in the middle. Its installation was quite a spectacular event, with tractor trailers and a mobile crane to lift and position the sculptural elements.

It was commissioned during the 1990s by the city as part of a convention on the history of Molfetta's old town. The sculpture is meant to represent the "weight" of history and nature and their contrast with modernity.
The people of Molfetta didn't "get" it. The people of Molfetta didn't like it. The people of Molfetta would stare at it during their Sunday walks along the port and ask, "What the $%@! is that?"
So, rather soon thereafter, the whole, very heavy thing was banished to its current location in a distant corner of town on a triangular bit of sidewalk between Via Pio La Torre and Via Salvo D'Acquisto. That's when the graffiti was added.
If, however, you happen to like large stone sculptures, I highly recommend a visit to Antonio's Sculpture Park in Matera, Basilicata. An amazing town, and Unesco World Heritage site, worth a visit for many reasons.
Posted by Saretta at 6:23 AM

I agree with atamatari: nice idea, but... a poor, nice Citroen 2CV is the "modernity"?
Nice photo and very good post!

Great post of this extraordinary sculpture or street art, its massive form is impressive.

Well...you'd not walk past this without noticing it. I quite like it because it makes me think. I like the weight of it - notice he didn't squash a Fiat! Or worse, a Ferrari! Pity about the graffiti. And thanks for that link - those stone steps are beautiful.

How sad the piece got banished from its original spot, but it makes for a great story that just adds to its personal history.Hope to get to Matera someday, have seen photos and the place looks amazing.

And I thought it was a warning for drivers to drive carefully. There's a squished car on a pedestal somewhere in Manila with just that warning, and this piece reminded me of it. Ah well. I do like the blocks of stone though.

My post today is especially for you, Saretta. I think you'll remember why when you see it.

Looks like any of our main streets on a saturday night.

well, I think I can relate to the criticism:D
cool picture though!
(word verification I got was "presse" , kind of appropriate!)

Quaint is the word that springs to mind...

i really cannot blame the molfettans for asking what the aitch this is...

I think that was the "Oracle of Molfetta"...

I can understand why many people would criticize the sculpture. It is often very difficult to understand exactly what an artist is trying to express in his/her art. Most of us tend to only look at the obvious .... a crushed car and then wonder what on earth! Sad about the graffiti though

I, too, thought it was a warning for drivers... It's so sad that the installation had to be removed. Like it or not. Here in Verona too, people are hard at understanding modern art...
Although I agree with Vogon Poet... why a lovely 2CV? I would squash the WINXS dolls rather...

the graffiti definitely adds a much needed touch!