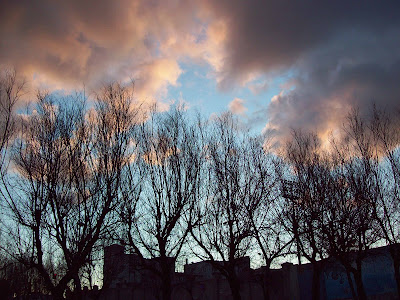 This photo was taken at the Prima Cala, a public beach, with my back to the sea, looking inland toward the town.

Along the bottom right you see the perimeter walls of the Paolo Poli stadium which is home to the Molfetta Calcio soccer team, includes track and field facilities and the two clay tennis courts of the Molfetta Tennis Club. The stadium was built in 1923, the bleachers were added in 1953 and a "modern lighting system" was installed in 1994.

Paolo Poli was a soldier from Molfetta who died in the First World War. It seems his father either donated or sold this piece of land, where he previously had a glassworks, for the construction of the stadium, on the condition that it be named after his son.

* Breaking news...we are having snow flurries this morning in Molfetta! That's very unusual for us!
Posted by Saretta at 6:24 AM

Is it the story of the stadium for real? Please try to find something more on this: it's so unusual also in the strange world of italian soccer...

I found this story on the web, but was unable to find any more info on Paolo Poli on-line. I am also curious about this because the semi-pro basketball team plays in a sports center named for "Giosuè Poli," the brother of Paolo. Hmmm. I'll have to ask around...

This is beautiful! Fantastic light!

That sky is incredible.

Poet - I have discovered that the Poli family is a local noble family that donates lots of money to various projects and, so, gets their name on things!

Valeria, just snow flurries, nothing that stayed on the ground!