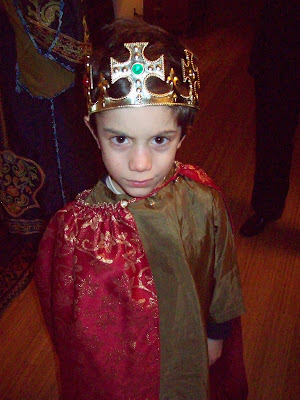 This weekend was the peak of Carnival festivities. The Carnival "season" begins January 7 and then continues until Fat Tuesday, the day before the beginning of Lent. This can be a longer or shorter period of time depending on when Easter falls each year.

During the entire season you will see children out and about dressed up in costumes as princesses, animals, popular cartoon characters, Zorro, etc. They run around city parks throwing confetti and streamers and spraying colored goop and stink bombs. For an American like me, it seems like a fantastic, extended Halloween.

These last few days of Carnival are celebrated around Italy with parades including elaborate floats, often with themes of political satire, and costumed groups that may sing and/or dance. There are also carnival balls, usually organised for children, but not only. One of the largest and oldest Carnival celebrations in Italy is held in Putignano, right here in Apulia.

Since I have low tolerance for both crowds and cold weather (two essential elements of outdoor Carnival events), I organised a party at home this year. King Henry is featured in the photo above, if you'd like to see the rest of us, check out my blog Amid the Olive Trees (on side bar).
Posted by Saretta at 10:25 AM

I never realized that King Henry was such a cutie! :)

What I'd do to have a carnival like yours! We just go straight to Lent — no Goodbye Meat or Fat Tuesday. Sigh.
--
Don't forget to vote for the April theme! We get two choices this time, thanks to Elaine. Please help spread the word too.

A deferent salute to His Majesty the King and to Sister Saretta!

Greetings to the high-born King Henry and the Princess.
___
Carnival is similar to Germans "Fasching". People love it to dress up and change for some days into a dream role.

low tolerance of crowds and teh c old? sounds like me!

it was too cold to go out this weekend, so i'm hoping for better conditions next week (the greek orthodox lent period starts a week after the catholic)

Great to meet King Henry, I will show him to my little Princess Elena!

Thanks for all your kind comments from His Royal Highness and my humble self!

My youngest son has Henry as a middle name:) John Henry.