Giovinazzo in the Distance 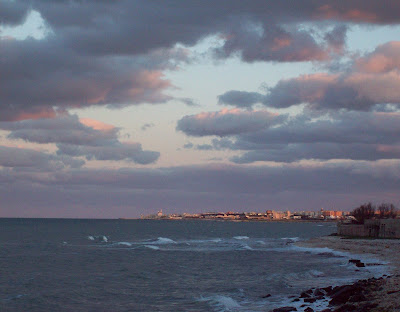 From the end of the Lungomare there's a pretty good view of the Giovinazzo skyline, six kilometers south of Molfetta. Between the two towns lie several public and private beaches which are heavily populated in the summer months.

If you enlarge the photo, and look at the tip of land that extends furthest out into the sea, you can see the bell towers of the Giovinazzo cathedral, built in the 1100s. My husband and I were married in the cathedral's crypt.
Posted by Saretta at 6:02 AM

oh wow!
such a romantic place to get married in!!

Now I'm curious and would like to see the church! Beautiful Lungomare, nice light under this cloudy sky.

You live in a very beautiful part of the world.

Interesting. Those colors of the sky are a bit different from what I usually see.

really a beautiful picture of heaven and earth ...
thanks

gorgeous picture and gorgeous sky.... speaking of which it could be part of skywatch friday....today was the first time I ever participated.... but have long enjoyed the fruits of the game.

What a beautiful coast line and a romantic spot for a wedding...and you've captured the gorgeous sky as well! Nice!

Married in the crypt. Now that's different. Even with my own beach I still find others so very different. The colours are so beautiful.

Thanks for all you comments!