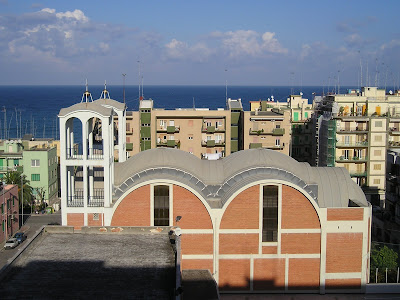 This church is better known as "San Filippo Neri" which is the name of its "oratory." In the Catholic tradition an oratory is a place of prayer, but technically it means a structure other than a parish church, set aside by ecclesiastical authority for prayer and the celebration of Mass.

Oratories seem to have originated from the chapels erected over the tombs of the early martyrs where the faithful gathered to pray, and also from the necessity of having a place of worship for the people in country districts when churches proper were restricted to cathedral cities.

The term is used here in Molfetta to mean the activities organised by a church for the children of the parish. These include sports, crafts, organised games, drama, summer camp...whatever the church volunteers are interested in or capable of doing with the kids.
Posted by Saretta at 7:49 PM

Wonderful image.
To see a church always makes me happy.