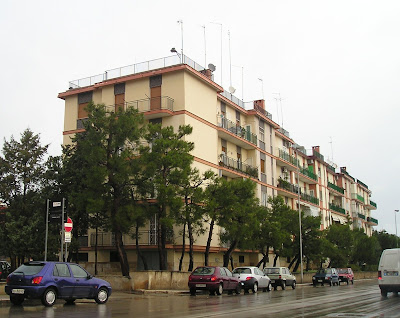 This is the building we used to live in before we moved out to the countryside about 2 and half years ago. It was a pleasant place to live. I had nice neighbours, always ready to lend me an egg or a cup of flour, there were other kids for my boys to play with and two nice large grassy areas where they could play.

It was built about 35 years ago when this southern side of Molfetta was "out in the middle of nowhere." A friend who grew up in this building tells of the long walk into town to go to school. Now there's an elementary school right across the street, my boys walked to and from school by themselves when we lived there.

The name is interesting: "Ex-Cooperativa Fomalhaut." A cooperativa is a building built by a group of people who put their money together (I'm sure there's also some government financing involved), buy a piece of land, and build an apartment block. They have to work out all the details of style, materials, costs, etc. together. It is now an "ex" cooperativa, I imagine everyone got tired of having to cooperate!

The name "Fomalhaut" is an unusual choice, as it is not an Italian word. In fact, Fomalhaut is the name of the 18th brightest star visible from earth. It derives from an Arab word "Fom al-Hut" meaning "the mouth of the fish." No one was ever able to explain to me how that particular name was chosen...not even the original members of the cooperativa!
Posted by Saretta at 12:08 PM

funny to read this buildings' story!

interesting story all around - from the name (fishy) part to the fact that the building went from being a cooperative to an ex-cooperative. usually it's the other way around, apartments become coops with people wanting to buy into them instead of just rent. maybe all the original people left