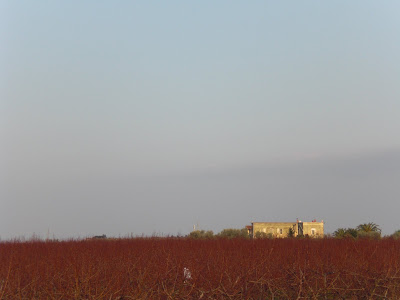 Being all together at the holidays typically leads to the telling of the old stories...of good times past, family quarrels, achievements, adversity overcome. The children love hearing about the lives of their parents, grandparents, even great-grandparents.

Many of these stories, both happy and sad, revolve around a large farming property that used to belong to the family. My children's great-grandfather borrowed a sum of money from his two unmarried sisters and invested in a large piece of malaria-infested swampland near San Ferdinando di Puglia. He had heard that Mussolini would be starting large land reclamation projects in southern Italy. His risk paid off and the property became a fertile and productive farm.

Yesterday, my husband took our sons and their cousin to visit the farm. The current owners welcomed them with open arms, gave them a tour of every square inch of the property, both inside and out, and sent them away loaded down with a large crate of fruit from the garden.
Posted by Saretta at 9:02 AM

Beautiful and I enjoyed the post. Farmhouses in Italy look much different than farmhouses in the US! What is all that red brush growing?
How kind of the new owners, I'm so happy they took your family in and showed them around and made them at home!