Monument to the Mariner 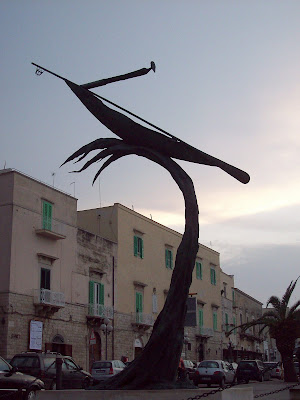 This monument to the mariner is located on the port. The base is a stylised wave on which are perched the mariner (the rather phallic looking bit!), his fishing rod and boat.

The monument was designed and constructed in 1999 by Giuseppe Maraniello, who is not a local artist. He participated in a design competition and his proposal was selected by a local jury.

It was received by the majority of Molfettans with great skepticism and criticism. I think they had something a bit more traditional in mind.

I like it too. I actually enjoy it when 'traditionalists' get a little shocking jolt. They usually need it. ;D

I like it, but i like more modern interpretive art. I REALLY like the statue by the church where the "festival" brings the Madonna statue. That is fantastic. I took many, many pictures of it.

Hilda - I agree with you!

Lucia - we have a lot of green shutters here in Molfetta!

Hyde dp - I'm curious to know how you think the monument matches the tree...both gnarly?

Thank you, Pietro and Nobu!

Lagrasta - I think you mean the statue of the Madonna and Child outside of the Madonna dei Martiri church. I will post a photo of that statue and you can tell me if it's the one you have in mind.

The Molfettans were probably puzzled at how this contemporary piece blend (or not blend) into the traditional architecture of the surrounding.

But a little shock value is good for the soul. :-)