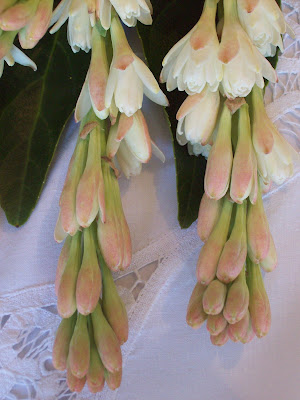 Italians celebrate two days each year that are special for them individually: one is their birthday, and the other is their saint's day. For those of you who do not know, every Catholic saint has a day of the year that is celebrated as his or her "day" and everyone with that saint's name is also celebrated that day. Today, for example, it's the day for Saints Isaac and Laura the Martyr. I know because all Italian calendars have the saints written on each day. 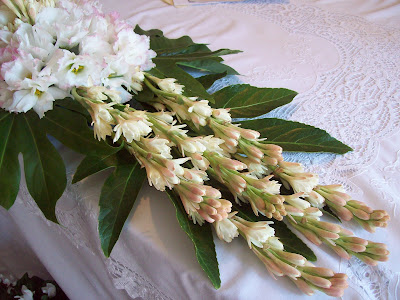 My sister-in-law is, therefore, named Serafina and she has several cousins with the same name. They all have nicknames because Serafina is considered an old-fashioned name, so we have Serì, Fiorella, Nella, Nellì, etc. And it can get confusing when lots of people in the family have the same name! 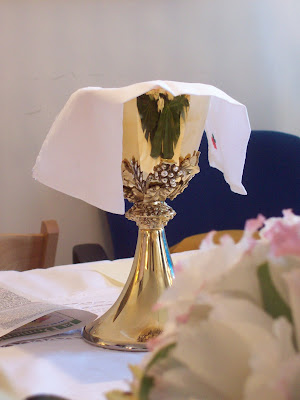 In honour of her grandmother, and as a convenient excuse to gather the family together (it seems like we only get together for funerals recently!) my sister-in-law organised a special mass in her mother's home. My mother-in-law is no longer very mobile and doesn't get out to mass anymore, so the mass combined with a family reunion was a nice treat for her.

These photos are of the beautiful altar that my sister-in-law prepared on the dining-room table.

and of course, the naming tradition is exactly the same in greece - my children are named after both their father's grandparents!

What beautiful photos - I'll bet the ceremony was lovely.
Having been raised Catholic, I understand about the saint names. I have one too. My family (came from Slovakia) also passes down names; I was named for my maternal grandmother.
Thanks for showing me more of the culture of Italy

What a lovely tribute and a very special day for your mother in law. Your sister in law's table is just perfect. Those white flowers I don't know, but I am so glad to hear about your traditions. I honor my former mother in law today as well. WE are thinking alike!

M. kiwi - I never realised Italy and Greece have so many traditions in common... Well, I should have figured since I am living in what's called "Magna Grecia"!

Elaine - is your saint's name Elaine, or a different name?

Virginia - the flowers are called tuberoses and they have always been my mother-in-law's favorites. I'm happy to share Italian traditions and culture!

actually, it's more a Southern Italian tradition(the name giving i mean) in Sardegna for example, you are free to do as you please without any fuss from the family
Maria

Beautiful pictures of lovely flowers and a fascinating write-up.

My family has followed the same naming practices that Sara mentioned, that's why i have three other cousins with my name!

Also, after all four grandparents are accounted for, then we start naming the kids after the eldest siblings. For example, the third son, would be named after the father's oldest brother

And a lovely tribute your sister-in-law put together. Very nice. Isn't a seraphim like an angel?

I think the naming pattern was the same in Denmark too! For genealogists, it's a helpful hint when sorting out potential ancestors.

The Hungarians celebrate name days as well. Unlike birthdays, which were usually small family events, it was appropriate for a person to host a party and celebrate with friends and co-workers. It didn't seem to matter if you were Catholic or not.

Chuck - A seraph is a type of angel, and seraphim is the plural form of the word in Hebrew, if I recall correctly.

Ah, and the narrow-blossomed flower is tuberose, and it has a rich, powerful fragrance. My dictionary says they originated in Mexico, and were once used to flavor chocolate! I'll bet that altar smelled glorious.

The more open flowers look a bit like gladiolus, but it's hard to tell. The goblet is beautiful as well.

What lovely flowers and a lovely thing for your family to do.

It's a beautiful gesture and a very clear, lovely photograph! Family gatherings are very important is this increasingly depersonalizing world. Keep it up!

I love the chalice photo and enjoyed the story. my first name is mary - which is that of both of my grandmothers (not to mention a slew of other relatives). when I was born my family, which is czech-slovak, still stayed with the family tradition of naming (eldest) children after grandparents. however, the only people who ever called me mary were the nuns in school! since there were so many marys in the family I went by my middle name!

Thank you for all your comments and stories of naming traditions...very interesting!

Wikipedia has this to say about seraphims "A seraph (Heb. שׂרף, pl. שׂרפים Seraphim, lat. seraph[us], pl. seraphi[m]) is one of a class of celestial beings mentioned once in the Hebrew Bible (Tanakh or Old Testament), in Isaiah. Later Jewish imagery perceived them as having human form, and in that way they passed into the ranks of Christian angels. In the Christian angelic hierarchy, seraphim represent the highest known rank of angels."

But, www.americancatholic.org says "Saint Seraphin of Montegranaro lived the life of a shepherd and spent much of his time in prayer. Mistreated for a time by his older brother after the two of them had been orphaned, Seraphin became a Capuchin Franciscan at age 16 and impressed everyone with his humility and generosity.
Serving as a lay brother, Seraphin imitated St. Francis in fasting, clothing and courtesy to all. He even mirrored Francis' missionary zeal, but Seraphin's superiors did not judge him to be a candidate for the missions.

Faithful to the core, Seraphin spent three hours in prayer before the Blessed Sacrament daily. The poor who begged at the friary door came to hold a special love for him. Despite his uneventful life, he reached impressive spiritual heights and has had miracles attributed to him.
His feast day is October 12."

Elaine - the scent of the tuberoses is just about overwhelming. Very strong and very sweet. You want to keep a window open if you have them in the house!

I think this is a lovely idea. I'm an Episcopalian and I don't think we have that tradition but I think I'll pick one for myself and celebrate it all the same. Your SIL did a sublime job on the mass.

Is one allowed to celebrate and embrace more than one saint?

The flowers are so beautiful.

Who knows where to download XRumer 5.0 Palladium?
Help, please. All recommend this program to effectively advertise on the Internet, this is the best program!