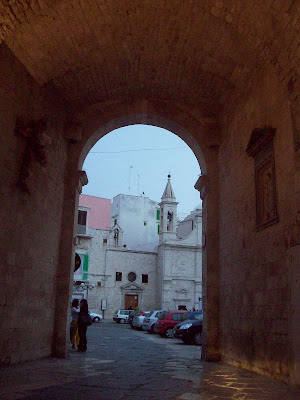 I haven't shown much of Molfetta's historical center yet, and it is definitely worth seeing. The old town was originally a round island. It has since been annexed to the "mainland" by landfill. The view above is from inside the main entry arch looking out. The area where the cars are parked was once water, from what I understand. In Medieval days there was a giant wooden door that was closed at sunset and opened each morning. A defensive measure used in most walled cities in that period to keep the bad guys out.

p.s. For all of those kind people who sent me good wishes for my son who was not well, I just want to let you know that he is doing much better. The doctors scared us silly with all kinds of dreadful possibilities, but all tests were negative! Thanks so very much for your concern!
Posted by Saretta at 6:52 PM

While in the center, I discovered a really great book store with a large selection and even a little café. I spent some money there on Molfetta history books.
Later while visiting another part of the center, i noticed the name on a door that matched my book's author. I had him sign it for me and that really made for my great keepsake.

What a wonderful coincidence to find the author!