Madonna of the Martyrs Church 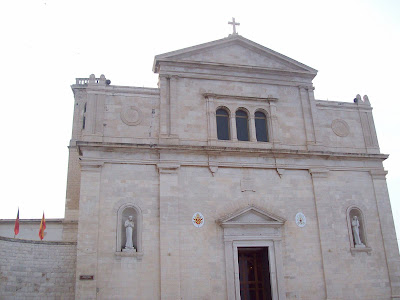 Yesterday's statue stands just across from this church which is home to the venerated statue of the Madonna of the Martyrs that I showed you during the festival of Saint Conrad in early September.

The first written documents that refer to this church date back to 1162 where it is mentioned as a chapel annexed to the hospital for pilgrims enroute or returning from the Holy Land (i.e., crusaders). In the photo you can see a stone wall with two flags, the hospital lies behind that wall, you can still visit it today. It is believed that there was a previous chapel on the same site and a pagan worshipping place previous to that.

The church we see today is Neogothic in style. Besides housing the statue of the Madonna which is said to be named Glikophylousa and to have been carried back from the "Orient" at the end of the 12th century by crusaders, the church complex also hosts a community of monks. It is possible to lodge with them when visiting Molfetta. For information, consult the following site.

This video is rather poor in quality, but it shows the church from a different angle and yesterday's statue is also visible.

Quite nice photography. And an interesting narrative.

Hi Saretta, I hope your son is much better. Wow on the church bells - I haven't heard anything like that in a very long time. My grandmother in Pula lived across the road from the Mornaricka Crkva (Seafarer's Church) - with a wonderful bell tower similar to this one. Thanks for that wonderful post.

Yeah, you don't want to live too close to those bells...they'll drive you nuts morning, noon and night! :-)