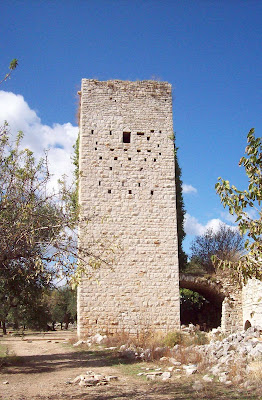 The territory in and around Molfetta is dotted with many watchtowers that in days gone by served to defend the local population from invading Longobards, Byzantines and pirates in general.

They "sounded" the alarm by means of setting large fires. The flames were visible at night and the smoke sent the same message by day to the people living in the nearby towns and countryside.

Torre Villotta was built in the 12th century and is part of a fortified farmhouse in the countryside inland of Molfetta. It is said that Boemondo, Prince of Taranto, Duke of Calabria and later Prince of Antioch, lodged here as he was preparing to set off on the First Crusade. It is known for a fact that the tower sheltered a large number of Molfettans during the sacking of the city by the French in 1529.

The tower is currently owned by Marquis De Luca. Yes, we have a marquis in Molfetta!

For a view of another local watchtower, look here.
Posted by Saretta at 9:42 AM

It is a interesting story.
The tower has been watching your city for so long long time.

Sometimes, I am surprised how people were in history so ingenious...to save themselves

Really, my mouth just drops whenever you Europeans mention the age of buildings. The 12th century just exists in books to me and here you are living with things from that age. It just boggles my mind.

The little holes in the tower are for archers and other defenders?

Fascianting history behind the watchtower. It makes me alugh how abuilding form this era is still standing yet modern buidling fall all to easily. We should look to the past.

There must be some kind of way out of there said the joker to the thief...
I'm amazed at how well preserved this looks.

How interesting! The use of fires and smoke signals resemble those of the Native American as a way to communicate....or so I read.

We don't have a Marquis but we do have Dean & Deluca, a gourmet coffee shop and grocery store. :-)

My mind still boggles at the thought of how old things are around here, too!

The beauty of these old structures is beyond my words. You live in a magnificent place, Saretta.

nice image and a very interesting piece of history. thanks.