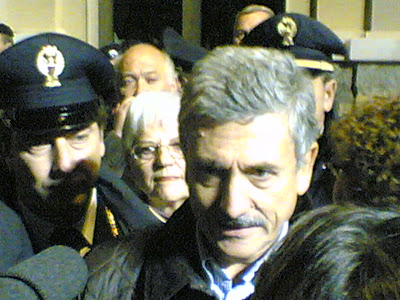 My husband took this cellphone photo of Massimo D'Alema at the Democratic Party (PD) festival in Bari Sunday evening. D'Alema is a journalist and a politician. He was formerly national secretary of the Democratic Party of the Left (PDS). He was Prime Minister from 1998 to 2000, and later he was Deputy Prime Minister and Minister of Foreign Affairs from 2006 to 2008. He is currently an opposition Member of Parliament, elected in the region of Puglia (where Molfetta is located).

It's hard to keep track of these Italian politicians' cv's. Things change so fast around here...new political parties seem to spring up every day, new prime ministers appear in the blink of an eye, people get elected in regions they otherwise may never have set foot in... It's rather complex, to say the least.
Posted by Saretta at 12:09 PM

I'm sure I could never keep track of it! This is an intriguing photo, by the way. Great excitement to it.

The politicians in the US are a little more predictable mainly because it takes millions of dollars to get elected.

So an ordinary non-millionaire will have very little chance to getting elected to higher office.

I think below the surface they're all sort of the same...very little true desire to render a public service...

I get the idea that Italy is still Italy because people get up and go to work everyday and will everything to turn out, politicians or no politicians.