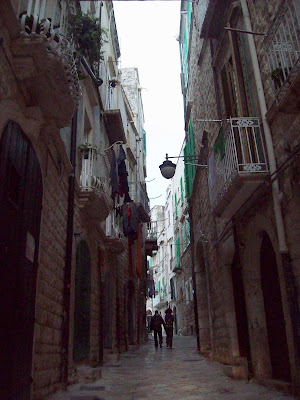 Molfetta Vecchia (or Old Molfetta, as the original city center is called) was an island. Its layout was designed in the shape of a fish spine, with one central street down the middle, Via Piazza (see map below) and other streets shooting off perpendicularly to the left and the right. It was walled by virtue of the buildings all being attached to one another all the way around, and was surrounded by the sea on all sides. The only entry at that time was through the main arch (see yesterday's post) so that when invaders arrived (which they often did) the main door could be closed to keep them out. If they did get in, all of the side streets were closed off so that the pirates or Normans or whomever were blocked on Via Piazza and could be attacked more easily by the citizens. The Molfettans would throw rocks at them or pour down boiling water or oil.

Today's photo was taken at the corner of Via Piazza, looking down Via Amente, the first street to the right. It is a bit dark, but that's the way it always is there. The houses are built so close together that not much sun gets down to street level.
Today is my 100th post...wow! ;-)
Posted by Saretta at 9:20 AM

Congrats on your 100th post! I love old streets like this, and I adore Italy and things Italian.

That's beautiful and love the history about it. Congrats on 100!! :)

I love narrow streets at the old parts of the cities, sometimes they can be quite a labyrinth! It is allways a surprise when you go around the corner. We have a lot around here too.
Great post!

serreta-Congrats on you 100th post! And congrats for winning my pumpkin naming contest. We are christening the girls, "thelma and louise" as per your suggestion! Thanks for stopping by and speaking up!

This is fascinating, but you forgot to mention the green shutters.

I Love the pictures of Molfetta Vecchia (aka ind'a le Terre)

Keep with this theme!

hooray for your #100!
nice perspective, I really get that sense of claustrophobia.
Prefer my olive oil over pasta, not boiling over my head.

Bravo for arriving at 100...that's not a small feat! I love your blog because of the photos and the interesting information that you include in your narrative. Many thanks!!

I love narrow streets. It feels dangerous and sexy at the same time.

Saretta, I've given you the Kreativ Blogger award. Stop by my blog to pick it up if you like.
Greetings

Thanks to all of you for your compliments on my 100th post! I wouldn't be able to continue if not for your comments and support. Here's to 100 more!

Benjamin - at a certain point...why overstate the obvious? ;-)

Kate - you make me blush!

Ming - shall we ask Freud what that means? LOL!

Saretta, congratulations on your 100h post! I am always... running because the blogger friends are too fast and my connection is too slow!!!... and the days roll by so quickly!

Congrats! 100!
I so look forward to each picture/post. Thank you so much for your efforts. They are much appreciated.