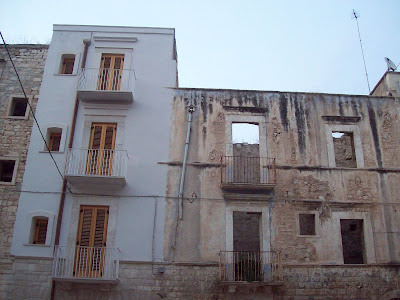 Further along Via Amente, the street widens a bit, not because it was designed that way, but because in the 1960s an entire building fell down from lack of upkeep. At that time, Molfetta Vecchia was determined to be an unsafe place to live and the majority of the inhabitants were moved out and settled elsewhere in public housing. That just increased the situation of neglect and many more buildings fell down, or imploded (see photo above) over the years.

An interest in gentrification began to grow in the 1990s. My husband and I lived in a renovated home on Via Sant'Orsola (see yesterday's map - go to the end of Via Piazza and turn right) for 11 years. We were the first family to renovate and move into that part of the old town. Now there are many renovated homes and even shops and coffee bars throughout Molfetta Vecchia. It's not touristy, but at least it's not as abandoned as it used to be.

You are welcome, Saretta! Go to my 29th previous post, click on the logo and save it to your computer; then you can resize it as you like.

Love this post too. Your description and photo are geat!

Great photo and explanation. I guess my husband would love to be there building new houses instead of the old ones.

Your Molfetta saga sounds very similar to the Sassi houses in Materra. But then you're not too far distant from that town either, if my geography is correct.

I'm sad to hear of the neglect. The area is so historic, I would hope time, money, and attention is directed to the area in hopes of not losing it.
WhIle visiting, there seemed to be a great amount of renovation happening.

That's right, Chuck, Matera is an hour's drive inland from Molfetta. A World Heritage site, definitely worth a visit!

Lagrasta, there has been a lot of renovation over the past two decades. There's still so much to do, but things are looking better!

Marie, couldn't he use his building expertise to fix old buildings, too?

How wonderful that you've moved into an old neighborhood (& it's soooo much work - I certaily admire you). I love the shutters on the inhabited building.