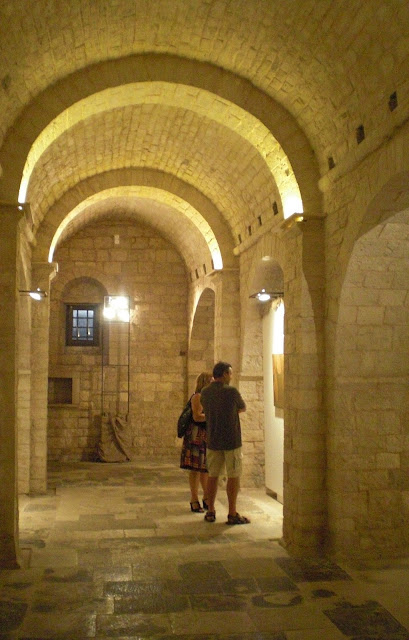 "Mimmo Rotella - Artypo 1966-1975" is an exhibit currently being shown in Molfetta's Hospital of the Crusaders. As interesting as Rotella's work may be, I can't help but feel that the building itself outshines any exhibit held in it.

The "hospital" was built next to the Basilica of the Madonna dei Martiri in 1095 and is not thought to have actually been a hospital, but a sort of guest house for pilgrims returning from the crusades to the Holy Land. A place where they could rest and recover, both physically and mentally.
Posted by Saretta at 10:15 AM

I think you are right on both counts: hospital probably means guesthouse in this case and, for what we can see, it surely outclass anything contemporary displayed inside.

It is so hard for us to comprehend something that old. The Crusades? Incredible!

Very beautiful building. I was very impressed with the overall condition of many of the buildings in Molfetta. Very old, but in remarkable condition.

Some that were in less of a state seem to have work being done showing Molfetta is really valuing what they have as a city rich with history.

It never ceases to amaze me how our predecessors were able to construct architecture like this, and the relative permanence they achieved!