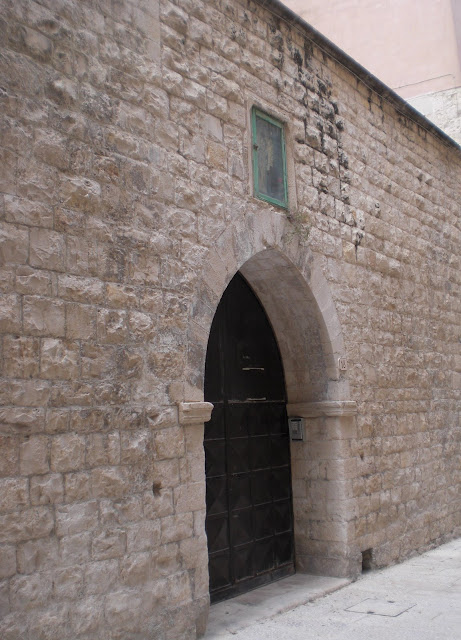 It may not look like much, but I spent 11 years of my life living behind this stone wall and lancet arch on Via Sant'Orsola. My husband did a beautiful job of creating our home in what was once a 14th century Benedictine monastery. Sounds grand, I know, but our home was basically formed of three large rooms and a loft.

Behind this arched gateway lies the only true "courtyard" in Molfetta's old town, with a beautiful stone stairway. I should show you a picture of the courtyard, but I don't really want to go back in there because I know it will be different from when we lived there. This was my first home as a newlywed, my two sons were born and lived the first years of their lives here...there are so many memories and I would like to remember the place as it was when it was ours.

So, why did we move away? Well, as glamorous and romantic as living in a piece of history may sound...it was damp and moldy! I developed a nasty allergy to mold while living there. I had repeated bouts of pneumonia and even ended up in the hospital. So, I told my husband that as beautiful as the house was...I was not willing to die for it!
Posted by Saretta at 12:44 AM

What a story! Your kids could say that the were born in a monastery...
I checked on www.bing.com and I think you could see something of your courtyard without seeing too much.
By chance I discovered that the street parallel to yours bears a very strange name...

Many old houses hide these terrible problems ...
And that was just beautiful!

Poet - I've never used Bing, what do I need to search for there? Yes, Via Morte has been featured in several posts of mine!

Mari - it was beautiful, it was a shame to have to leave it.

what a sad story - i would have done the same thing, even though it really does look so romantic living here

This stones have seen many storms - made one secure home

What a story! This house looks incredible and I am sorry to hear you were not able to make it your long term home, but obviously you did what you had to do.