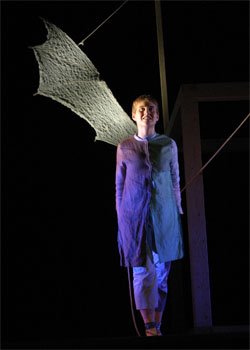 "Il Volo di Icaro," performed by Tib Teatro (of Belluno), tells the Greek myth of the flight of Icarus and his relationship with his father Daedalus, inventor of the labyrinth designed to imprison the Minotaur, monstrous son of King Minos of Crete.

I wasn't that crazy about this show, but this is about the time during the Ti Fiabo e Ti Racconto festival when going to the theater every single night starts getting to be a bit tiring...
Posted by Saretta at 12:09 AM

I understand your point. I'd be tired too, even if the show are interesting.

Icarus will never get there with one wing.

LOL! The other wing was on the other side of the stage!