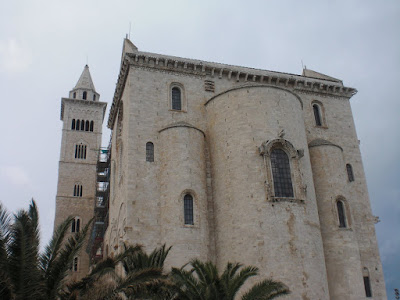 To follow up on my vampire insinuations of the other day, I decided to visit the Diocesan Museum in the town of Trani. Housed in this museum is a bust of Monsignor Davanzati, Archbishop of Trani in the early 1700s and author of a Dissertation on Vampires, which was not a novel, but the most exhaustive analysis of the vampire phenomenon ever written. It has chapters with titles like "On the Power Delegated to the Demon" and "Which Physical Causes Could Produce Vampire Appearances."
Unfortunately, the museum is closed for restoration for three months, so I spent some time in and around Trani's magnificent cathedral, completed in 1143, reputed to be the finest example of Apulian-Romanesque architecture. This style is known for its lack of adornment, sort of the opposite of Baroque.
The photo above shows the backside of the church. The front is being restored and is covered with scaffolding, but if you are curious to see it, click here. I think the dark and gloomy sky here sort of gives it a vampirey feeling! 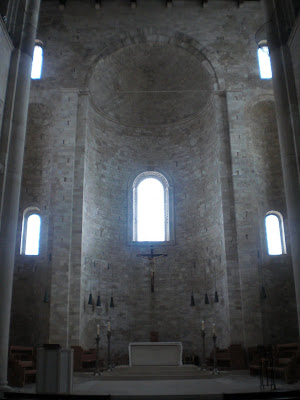 This is the altar in the uppermost level of the church. Below this level are two crypts and even further down a hypogeum, or underground, pre-Christian temple or tomb. 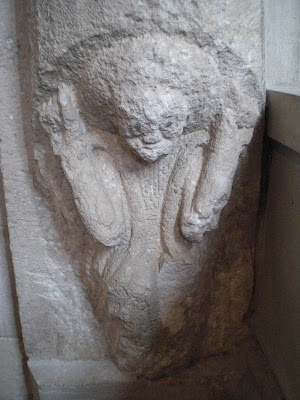 This fellow was industriously holding up one of the columns along the side wall of the church. 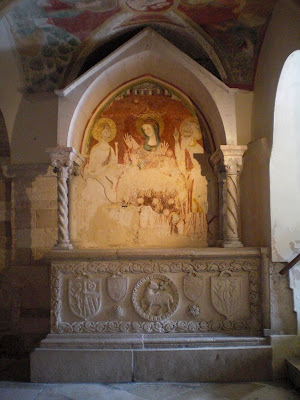 A fresco and altarpiece in the upper of the two crypts. 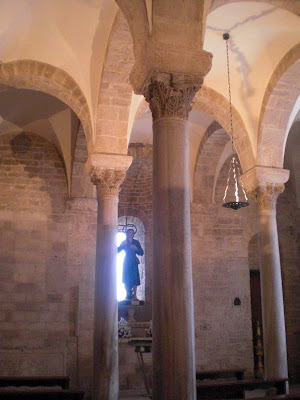 A statue of Saint Nicholas the Pilgrim, for whom the cathedral is named, is located in the lower crypt. This is not the St. Nick of Christmas lore (he is the patron saint of Bari, the capital of this region), but another Nicholas altogether. He came from the east to meet the Pope, but only made it as far as Trani before starving to death, according to some, or being assassinated, according to others, in 1094.
Posted by Saretta at 6:06 AM

Impressive, eerie, chill, foreboding cathedral. Reading your text and looking at your photos, the hair on my arms stood on end. Though I suspect, it's more because of your text! :)

I want a copy of the "Dissertation on Vampires"! Sounds like a very interesting (and fun) read! I wonder if anyone ever reprinted it…

Some of these shots appear to have bats in them. Coincidence?

Wow! Amazing and beautiful.. Imagine such a huge artiface that old. It is beautiful and smooth looking. It has a largeness about it. MORE!!! MB

At first I thought it was a castle! What wonderful shots! As Hilda said, though, the place has an eerie feeling...

Do people still believe this stuff?

I really hope not, Jacob!

Maybe your next project could be a translation of the dissertation? ;-)

A pity the museum was closed, why am I not surprised?

I love the photos the apses (exterior and interior shots). I've only ever seen photos of the facade. That's a very austere Romanesque...just the way I like it.

Really outstanding, a very impressive place indeed. Now I am totally curious about the "Dissertaion". PLEASE let us know more!!!

I love cathedral photos, both inside and outside! No church officials standing around with a "fig leaf?"