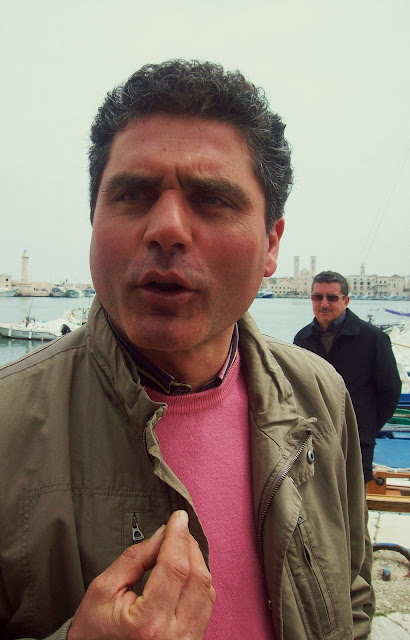 For some time now, I've been wanting to do a series of photos on the people of Molfetta. I had this idea that I would call it "Molfettan Faces" and it would show Molfettans of all different types. I have been inspired in part by the 100 Strangers Project. The problem is that I rarely am able to work up the courage to ask strangers if I can photograph them. The people I have asked have always said yes, but I still get all shy about it.

So, I decided to start the series nonetheless, but beginning with people I know. This photo is of Carlo. I like it as the first photo in the Molfettan Faces series because it captures the Molfettan skyline in the background and because Carlo is making a typical Italian gesture which means "what do you want from me?" or "hey, what do you mean by that?".
Posted by Saretta at 6:03 AM

I am so glad you have taken the plunge, Saretta. This is a lovely portrait with which to start. It does get easier. Follow the tips on the 100 Strangers site and you will gather courage with every portrait. You may wish to consider numbering each portrait so that you can see your progress with each one. May I add your Molfettan Faces to a list on our side bar? There are others in the blogosphere that I will ask the same question of.

Expressive portrait in a typical attitude, you started very well! You can now populate with people the streets and the squares of Molfetta.
I gonna try this sooner or later, but I'm not so sure...

This is going to be a very interesting and entertaining series.

Your description of the Italian gesture that means "what do you want from me" reminds me of a story that someone told me when they tried to call me in Arizona but dialed the wrong area code and reached whoever had my phone number in New Jersey. My friend said that he knew he had failed to dial Arizona (where there are not many Italians) but had called New Jersey (where there are many Italians) because the person answered the phone by saying, "Yea, 'dis is Vinnie. What ya want?"

I agree with you. I am always hesitant to approach people. I got a nice zoom lens. Problem solved.

It is always fun to see the people of a place up close...

This is an excellent portrait!

Thanks to all of you for your support! Dave, your anecdote is too funny!

Great idea, Saretta. And he is so very mediterrarean! You have explained perfectly the meaning of the gesture! I wonder what he was talking about?!?!?

I know exactly what you mean about asking. I always feel very shy too. Great photo by the way. I shall go to the 100 Strangers page and try and get some tips!

Great idea for a series. I have also been intrigued by the 100 Strangers Project but haven't decided yet if I can do it, because like you I am basically shy and very hesitant about approaching people and taking their picture.

This is a great snapshot of Carlo as it looks like you caught the essence of the man. I also like his pink sweater.

BTW, thanks for visiting my blog. And yes, I did leave the Sax player a tip. I always feel guilty if I take a street musician's picture and don't leave a buck.

Thank you for you visit, and for your permission. You are now on our side-bar. I look forward to each new Molfettan Face no matter how frequently.

Congratulations on taking the plunge. It really does become easier, as I reach 100 I am actually enjoying myself and don't want to stop - I was terrified when I started. Look forward to seeing your faces of Molfetta. They will say so much about the city, more than you probably realise.

This Mofettan face is priceless! Great shot and series idea!

Great Idea! I love his expression and the one of his amigo in the background! Nice lips on Carlo.

Very nice portrait. I like your work and also admire what Steffe is doing.