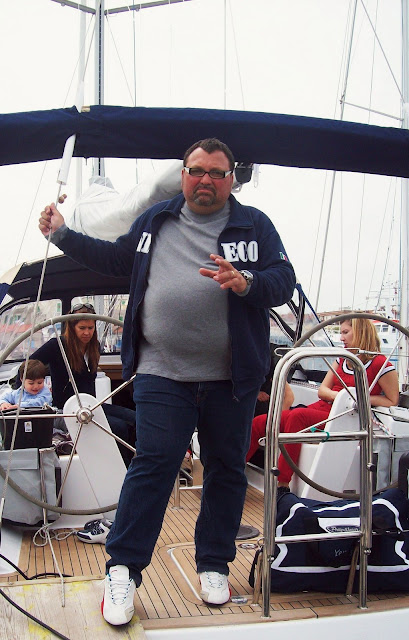 Michele's family is one of the wealthiest in Molfetta, they own a large company that produces industrial drills. He works for the family firm and travels a great deal around the world. He was a wild and crazy kind of guy in his youth and was the lead singer of a band called I Figli delle Stelle, which specialised in raunchy humor and parodies of famous songs 1970s style (think large wigs and platform shoes). They reunited last summer for a hilarious concert here in town.

In this photo, Michele is standing on his family's 42-foot yacht, the very largest pleasure craft in Molfetta's harbor...by a long shot!
Posted by Saretta at 8:09 AM

Very good portrait of an interesting guy. I was curious and so have found this link:
Figli delle stelle.

He looks like he could still be carrying some baggage from his wild youth1 a Terrific shot, Saretta. Once again, the hands have it!

He does look like a fun loving guy. Nice shot of another Molfettan face.

A fun fact for fun-facts seekers out there.