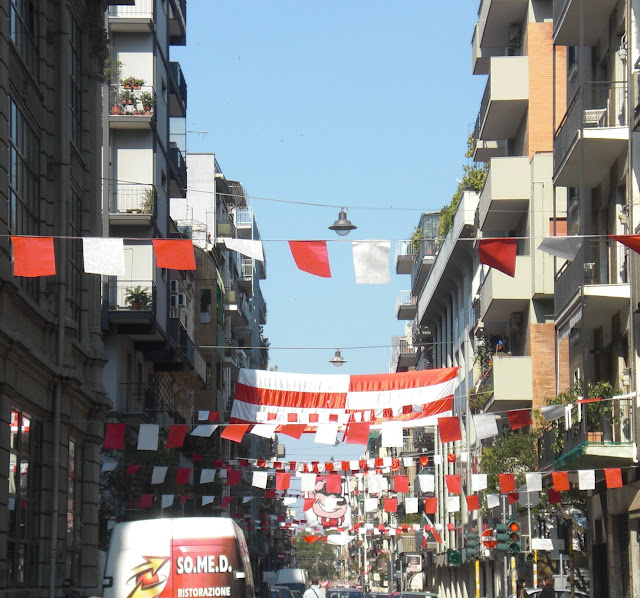 When I arrived at work Wednesday morning in Bari, which is located 25 kilometers down the Adriatic coast from Molfetta, I found the streets in front of my faculty decorated for several blocks with banners in the colors of the Bari soccer team. There had been a game the night before which, if Bari had won, would have gained the team a place in the A Series of national soccer. Much to their chagrin, Bari's team has been in the B Series for a few years now, and that is clearly not as satisfying as playing with the big boys in the A Series!

Unfortunately, the Tuesday night game against Empoli ended in a tie score, 0-0. However, if Bari should win on Saturday against Piacenza, there is still hope! Forza Bari!
Posted by Saretta at 5:54 AM

Fun! Good luck to the team and keep us posted!

Don't care much of soccer so I could easily wish Bari any well. Forza Bari!

I'm not a soccer fan myself, in fact, I tease my son by saying that I root for Chievoverona, a team that he could care less about, just to tease him.
I just like all the red and white flags across the street, the festive mood!

great to see the banners on show