In recent years, a new channel of communication has taken over the streets of Molfetta in the form of "sheet messages." They are just what the name I have invented for them implies...messages written on bedsheets and hung out in a public space. Often you find them hanging down from overpasses or bridges. The most common message offers best wishes for couples about to marry, but they have also been used recently to mourn the untimely deaths of local young people. This same kind of public message used to be written on photocopied flyers plastered to walls and telephone poles, but the sheet is "in" now. 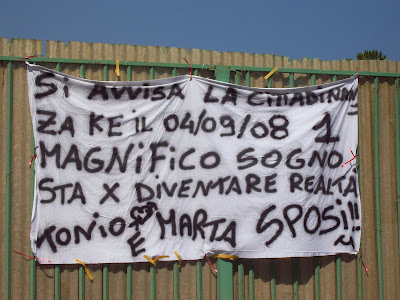 The sheet above says, "The public is advised that on September 4, '08 a magnificent dream is about to come true. Tonio and Marta, bride and groom!!" 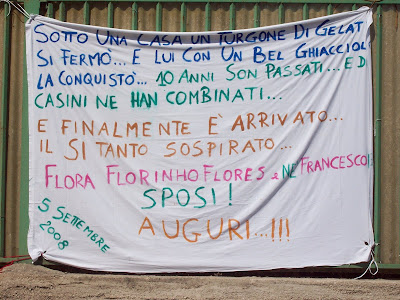 This one is a bit more complicated as it is written in rhyme, which I don't think I can replicate in translation...but the gist is: "An ice-cream truck stopped in front of a house... And he won her heart with a popsicle... 10 years have passed... And they have gotten into lots of scrapes... And finally the long desired day has arrived... Flora and Francesco, bride and groom! Congratulations!" They put this one up a bit early since the wedding isn't for another 3 days!
Posted by Saretta at 2:59 PM

What a wonderful fad -- hope it continues. Much nicer than paper fliers.

I hope they're old sheets and won't need to be washed. :-)

I haven't forgotten "il forno", still wishing my "village" had one but I guess we all have to move forward -- what strikes me about the sheet messages is that people aren't spray painting them on buildings. Which is what you would see here. It's a really wonderful way to say something to the world. Sort of like a blog, but less virtual. ;~)

What a lovely way of spreading news...much more environmentally friendly and the sheets can always be reused.

I agree with all of you that the sheets are much nicer than dirtying up the streets with flyers or graffiti on the walls. The sheets don't get reused, though, they are usually left where they were hung until they disintegrate!