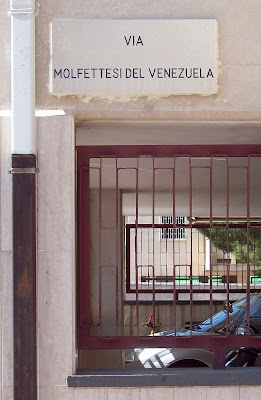 Molfettans, like Italians from all over the nation, but particularly the South, have emigrated to the four corners of the earth in search of a better life and opportunities. This phenomenon began in the late 1880s, if I've got my history right, and continues today. Some city streets are named after these emigrants. Via Molfettesi del Venezuela is dedicated to those Molfettans living in Venezuela. There is also Via Molfettesi d'Argentina, Via Molfettesi d'America, and so on.

Great numbers of these emigrants return to Molfetta each year for the patron saint's festival held on and around September 8. The patron saint of the city is Saint Conrad (who is said to have died nearby on his way home from the crusades), but the Madonna of the Martyrs also plays an important role during the festival.

I'll post more about the festival over the weekend.
Posted by Saretta at 8:00 AM

I love the lines of this composition. I've never imagined such naming - very interesting.

I love this minutiae, especially since it creates continuity for the people who felt compelled to leave. I imagine they sent money home and that made them fairly important to the economy. Nice way to remember them.

Thank you! And, yes, they did (do) send money home. They are also often quite emotionally linked to their city of origin. There is an association of "Molfettans in the World". These emigrants also tend to live in communities together with other Molfettan emigrants...so, for example, there's a community of Molfettans in Adelaide, Australia, one in Caracas, Venezuala and another in Hoboken, New Jersey. They continue to speak the local dialect, but over the years it gets mixed together with the language of the new country...an interesting phenomenon from many points of view!