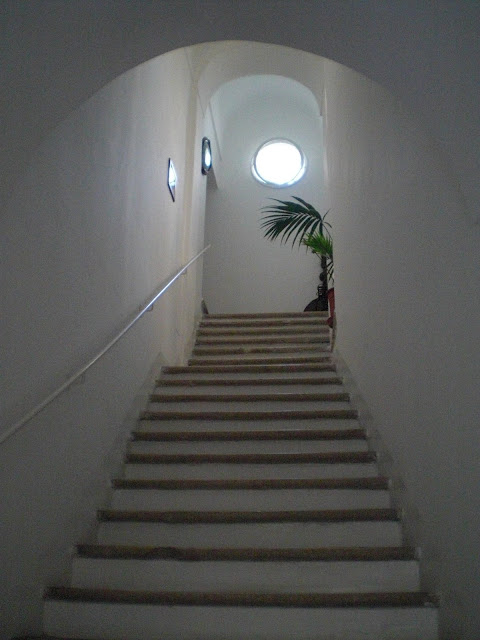 This entrance hall is located on Via Santa Scolastica, in the "Camere Nuove" area of town. The Camere Nuove, or "New Rooms" were the first homes built beyond the limits of the Old Town. You can't see this entryway from the street as it's hidden behind a large "portone," which is the building's main door. The style of this entry is quite different from the modern one I featured in an earlier post. I know which of the two I prefer, but take a look at the other one and let me know what you think.
This building was the birthplace of Leonardo Azzarita, a famous journalist born in Molfetta in 1888, he died in Rome in 1976. He wrote for and directed several national newspapers, was president of news services and journalistic associations. His son, Manfredi, who was a member of the Resistence during WWII, died at the Fosse Ardeatine (1944).
Saint Scholastica, just in case you're wondering, was the twin sister of Saint Benedict and led a religious community of women in central Italy in the early 500s. She is the patron saint of nuns and convulsive children and is invoked against storms and rain. Read more about her here.
Posted by Saretta at 6:02 AM

i like this one - really pretty, quite functional and simplistic

the old one, always the old one - it has so much more character. It has history.

Oh, I definitely prefer this one. It has so much drama and style. The new one (in the other photo you linked) looks like a typical entrance to a 1960s building in NYC.

I prefer this one.

There's an exclusive Cathlic girls school in Sydney called Saint Scholastica's.
Sorry I haven't been commenting much lately - combination of life circumstances. SDP has had a 3rd birthday and you're invited to the party!
Sydney Daily Photo

I agree with you all. This entryway has such clean, simple lines and the traditional white paint of the area. No competition!