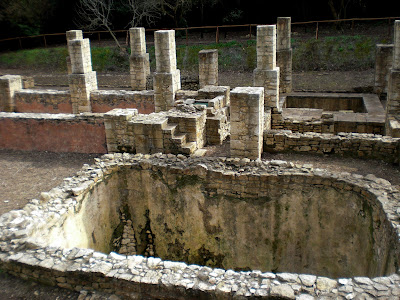 In the second half of the 18th century, Molfetta's "pulo" attracted the attention of the Kingdom of Naples and the Bourbons because of the high level of nitrate found in the soil of the caves. A gunpowder factory was built in the center of the pulo itself. The photo above shows a series of large basins in which the soil from the caves was "washed" in water. The nitrate was filtered down into lower channels at the bottom of the basins and then collected. 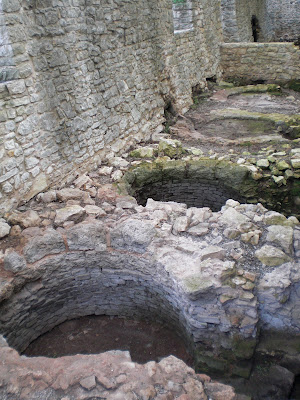 The photo above shows the four ovens in which the gunpowder was "cooked." I'm afraid I'm a bit unclear on the process...I was too busy taking pictures and missed the explanation!

Local myths claim that there were underground tunnels that led from the pulo all the way to the sea (2 kilometers away) and that the gunpowder was carried through them to be loaded onto ships for transport. Tunnels leading inland have been discovered in the historic center of town, but what remains of them does not lead very far, so this myth remains unproven.
By the end of the 1700s interest in the gunpowder factory was already declining and the structure was abandoned and allowed to fall into ruin.
Posted by Saretta at 5:50 AM

Being a failed chemist, I feel compelled to offer my humble opinion: I doubt they really made gunpowder there, all I can see point to the extraction of nitrate (saltpeter).
This process needed "cooking" to concentrate and crystallize the salts, which probably were shipped somewhere else to be mixed with the other components (sulphur and charcoal) of gunpowder, which is better not to cook...
Boring as a Vogon, eh?

No, no! It's fascinating! Thanks for the info! They call the factory there a "nitreria," does that explain anything?

Whichever way the story goes makes only a slight difference. The important element is the inventiveness and ingenuity of our predecessors. Fascinating!!

Yes, "nitreria" in italian means exactly where they extract nitrate or saltpeter.
Anyway Chuck is absolutely right and I am still ashamed of my punctiliousness...

Fascinating series on the pulo, Saretta!

Wow! How have I missed this super-significant historic treasure just down the road from me? Thanks for the great photos and information -- I think I'll be heading down your way to see it first hand some weekend in the near future. Fascinating!

This is great! Very interesting.