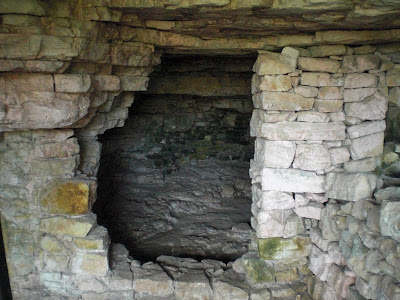 Only one of the cave dwellings at the Molfetta Pulo can be visited. It's amazing to think that this cave was inhabited from the Neolithic age up to the 19th century. You can see that the entryway is formed by a dry stone wall that was added to make the cave more "house-like." 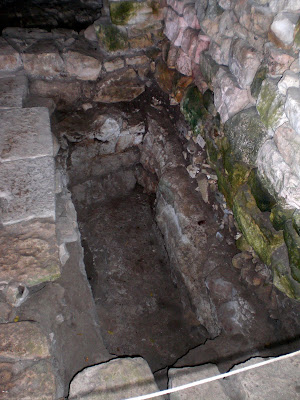 Just outside the entry to this cave, there is a tomb in which archaeologists discovered six skeletons. Three were male, two were female and one was of undetermined sex.

In the second half of the 18th century the first discoveries of prehistoric materials were made: painted ceramics, flint arrowheads, obsidian hatchets, and bone tools. These artifacts can be seen at the Museum of Molfetta's Pontifical Regional Seminary.

In the first decade of the 20th century, systematic archaeological digs were carried out in the fields around the "pulo" by prestigious archaelogists, who discovered the remains of a necropolis and a neolithic village.
Posted by Saretta at 6:00 AM

This is REALLY interesting! I love to visit archaeological sites and this one looks so beautiful.

What a coincidence...On the front page of our local newspaper write today about new archeological digs in center of Rijeka....

I would love to visit this place. A real time machine.

--re: your comment today on my blog. Yes, those are curtains I folded. I didn't have a lace tablecloth! :<)

That looks fascinating. I'd love to have a look.

Actually, I'm surprised at the primitive nature of the pulo considering how advanced and sophisticated Rome was pre-Christ.

Ming...Rome is ROME! This is the middle-of-nowhere southern Italy boondocks! We still don't have infrastructure down here...go figure in pre-Christ days!

When the Pulo was originally inhabited during the Neolithic period, Rome was still a backwater swamp!