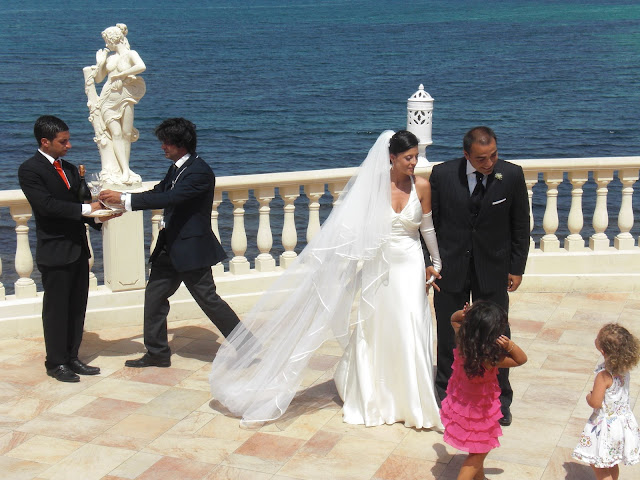 Yesterday I spent the day at the wedding of two dear friends. And when I say "I spent the day," I mean *all* day. The ceremony in church started at 11 a.m. and ended around 1 p.m. The wedding party then moved to La Perla del Doge (click on the name for more photos and info), a wedding reception hall on the sea.

The aperitifs began at 1:30 on the roof terrace and continued until about 3 p.m. We then all moved down into a different room where appetizers were served. Three first courses (pasta, rice, etc.) were served, then lobster, followed by sorbet, then two meat courses. All of this eating was broken up by dancing and various photo opportunities.

Just when everyone felt they could eat no more...we were guided down to another terrace, this time on the sea, where the wedding cake, a dessert buffet, after-dinner drinks and cigars were served. During this phase, we were entertained by the bride and groom arriving "by sea" on an elaborately decorated rowboat and, later, fireworks. Then more dancing.

The party was still in full swing at 11 p.m. when my family and I left...exhausted!

p.s. Yesterday was the first anniversary of Molfetta Daily Photo! I just realised now!
Posted by Saretta at 9:35 AM

Bravo!
What a nice photo!
Nice blog too.

Great photo, so natural but well composed. Southern weddings do really eclipse our not so modest ceremonies...
Good anniversary, even if a bit late!

Congratulations! How did you ever manage to get out of bed today?

What fun - and how exhausting. A beautiful photograph, Saretta. And many many congratulations. I so enjoy your blog, even if I don't leave comments all the time.

What a location for a wedding! It is gorgeous. And I love the dress, it is so nice to see a bride with shoulder straps these days not looking like she's about to spill out :) Altogether lovely. A real smile-to-the-face shot.

Hi! Thank you for visiting my blog! Very beautiful photo, and a spectacular place for a wedding! I gto married myself this year and it was also by the sea, if you wanna look there are some picture in my blog, look ofr tthe tag " wedding".
Congratulations for your anniversary!!

Happy Anniversary to you and to the newly married couple. What an elegant affair. One to be remembered for sure.

Lovely photograph! You should have been the official photographer...

I can imagine you were exhausted! My goodness. Just the two-hour ceremony would be exhausting!

Congrats on your 1st anniversary! Hope you have lots more! This is a wonderful blog!

Happy anniversary! And many happy photos to come!

Congratulations to you on your 1 year blog anniversary! Congrats to the beautiful newlyweds! Could you show us MORE pics from the wedding? Dessert bar, couple arriving by fancy rowboat . . . . Grazie mille!

Thank you all for your good wishes! I wish I could show all those details, Leif, but my batteries died shortly after this shot! Why does that always happen to me?

Oh wow, that is a looong reception — but sounds like a lot of fun! And what a wonderful place for a wedding!

Congratulations on your blog birthday! You know that your blog's one of my favorites, so I definitely hope that you continue blogging for many, many more years! :)

Thats what you call a wedding day! Great fun.

Many congrats on reaching one year :)

So were you dressed to the nines too?

Yes, I was Ming! Of course! But no one takes pictures of the photographer. LOL!

Happy Anniversary! I check your pics every day or two and always enjoy them - you've got a wonderful 'eye.' Thanks!

Thank you Fern, I appreciate your encouragement!

Congratulations on your anniversary. What a fitting way to celebrate!! No one threw that kind of party for me when I turned one -:(